Most Useful Languages in Europe

Most Useful Languages in Europe

Europe is a diverse continent and the central hub for job opportunities for people from all over the world. Therefore, one has to be aware of the most useful languages in Europe if he/ she plans to migrate. Europe Union has around 24 official languages of which English, French, and German are high procedural languages. Moreover, Europe also embraces notable cultural attitudes, like community, tolerance, and liberal democracy. 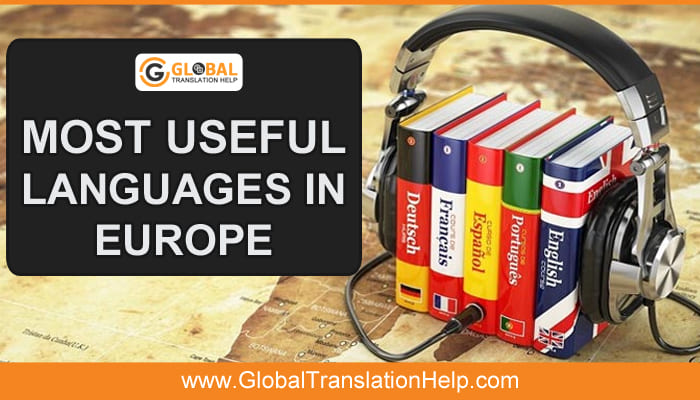 The diversity in the languages and culture is what makes it an amazing and unique place to visit. Yet when it comes to deciding which language is useful in Europe for work or vacation, the choices make for a difficult decision. While it’s fun and exciting to learn any language, to learn a hard language is a real task.

The “usefulness” of a language depends on several factors, including personal goals and preferences. Here are some key things to take into account when deciding which EU language is most useful for you:

If you’re planning on permanently shifting to a European country, the language will for sure be a barrier.  So, you may need to know the most common languages in Europe. Moreover, people may face so many difficulties in learning a foreign language. So, one should be really careful while choosing the most helpful language in Europe. Here are the 10 Highest Ranking useful European Union Languages:

The most useful second language to learn in Europe might not come as much surprise as English. For personal development and globalization, English is the most common language, which has speakers all over the world. English is a noteworthy European language in global business as it is the official language in 67 countries. That extends to all continents, including the UK, Australia, USA, South Africa, and Singapore.

Moreover, English is on the rise used not only in Europe as a lingua franca, especially by the younger generation of Europeans. The European Union of 28 member states has 24 official languages, but in practice, only two are used most often: English and French. So, learning English might be useful in Europe. Therefore, English is the first among the top most useful languages in Europe

With the number of native speakers at about 80 million, French is one of the most helpful European languages.  It is the official language of France as well as a co-official language of Belgium, Switzerland, and Luxembourg. Therefore, in Europe, the French can be very useful.

There are around 120 million native speakers of Russian in Europe. Learning Russian as a second language may be tricky as most languages in Europe use the Latin alphabet, Russian uses the Cyrillic alphabet instead. Moreover, apart from Russia, it’s also still widely used in many eastern European countries. For example, Belarus, Kyrgyzstan, and Kazakhstan, etc. So, if you are planning on working in a Russian company in Europe, you may have to learn Russian. Russian is one of the useful languages in Europe.

German is the sole official language of Germany, Austria, and Liechtenstein, and it’s a co-official language in Switzerland, Belgium, and Luxembourg. Germany is the economic powerhouse of Europe therefore a lot of career opportunities are overflowing there. Moreover, around 16% of the EU population speaks it. It is among the 3 procedural languages; English, French, and German.

Around 45 million Europeans claim Spanish as their mother tongue. With Spain being an attractive tourist destination, millions of immigrants from around the world have flocked to the country. Moreover, it’s the official language of 22 countries, including Spain and 9/12 of the South American countries. Further, after Mandarin Chinese, it is the second most language with the highest number of native speakers. That all the more reason to learn this language.

Turkish has around 70 million native speakers in the world. In addition to being the official language of Turkey, it is widely spoken around the Mediterranean, particularly in Macedonia, Greece, and Serbia. The  Ural-Altaic Linguistic Family classifies it as a member, making it closely related to Finnish and Hungarian. So, one of the most useful languages in Europe is Turkish.

There are around 69 million Italian native speakers in Europe. Moreover, over 3% of European citizens being able to speak it as a second language.  Italy was the birthplace of opera and is also one of the leading countries in fashion design. Therefore, learning Italian as a second language won’t do any harm.

Ukrainian has around 45 million native speakers and is the official language of Ukraine. Moreover, it is the largest country by area in Europe excluding France’s overseas territories and the Asian continental portion of Russia. Though Russian and Ukrainian come from the same roots of Old East Slavic, it is actually more similar to Belarusian, Czech, Slovakian and Polish languages.

Polish has around 40 million native speakers in the Czech Republic, Hungary, Belarus, and Ukraine. This language belongs to the West Slavic group of the Indo-European language family. Polish might prove to be among the useful languages in Europe.

Dutch and Romanian narrowly beat each other for the last position. It is the official language of the Netherlands but also enjoys a co-official status in Belgium. Around 5% of the European population speaks this language. So if you are also planning to move to some European country with most Dutch speakers, you should consider learning it.

Learning a second language is a challenge when you’re not a native speaker or living in that country. However, there are many alternatives if you don’t wish to learn a new language just hire a transcriber, interpreter & translator for your business.  So, don’t panic if you can’t grasp the second language easily, it may take time.