Is The French Language Dying?

With the increase in Globalization and adaptation multiple languages, it’s a raising question, ‘Is The French Language Dying?’ The death of a language is when there are no remaining native speakers of the language. Eventually, through time, there are many languages that lose it’s presence because of the more dominant languages. 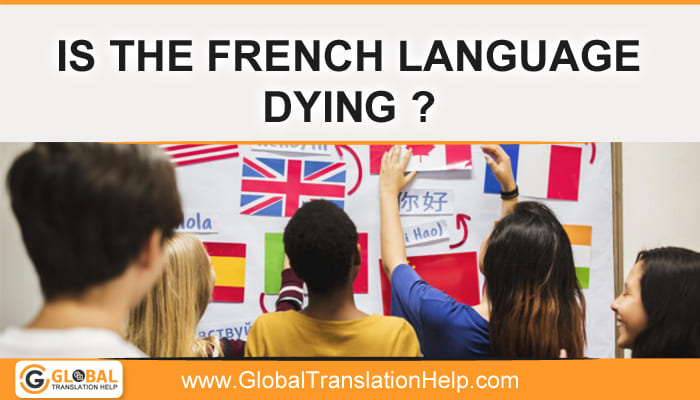 Through various geographical, biological and societal changes, languages can deplete partly or even entirely. Language death is a complex process that involves linguistics, physical science and history. However, as far as the concern with the future of French language,  it is definitely not a dying language. It is one of the 3 procedural languages in Europe; French, English and German. French is predicted to become the most widely spoken mother tongue in Europe by 2025 and the most widely spoken mother tongue in the world by 2050.

Further, it is one of the few languages that carries some sort of official status in every single continent. Around 65 million people speak French. In every continent, you will find at least one country that speaks French officially in some form. Moreover,  it is the second most ideal language for travelers.

If you don’t encounter an English speaker, then (on a global scale) you are more likely to encounter a French speaker. Moreover, according to a research, French was found to be the second most studied language in the world, the fifth most spoken language, the second working language in most organizations and the fourth language of the internet.

Is French Dying in Europe?

However, while the overall trend is positive, the French tongue is actually declining in its European homeland. This is partly due to the lack of foreign-language teaching in European schools. English has been dominant to French in many international organizations where earlier official working language was French.

French has always been a language that has been enriched by words from other languages. We need  understand the world we are in is enriched by external influences. However, we need to protect the authenticity of the French language. There are organizations in France that are investing much energy in protecting French from outside influences.

Learning French in Europe can be useful if you plan on settling in countries where French is the native language. For instance, Belgium, Luxembourg, Monaco and Switzerland. Moreover,  having the ability to speak French undoubtedly increases the probability of successful business transactions.

In conclusion, French is difficult to learn, however it has it’s benefits for building your business as well. Not everyone has the ability to learn a foreign language so they tend to take services like translation, interpretation, transcreation etc. We can still try not to endanger the French language. So, lets hope for a better future for the French language; ‘vive le français‘.